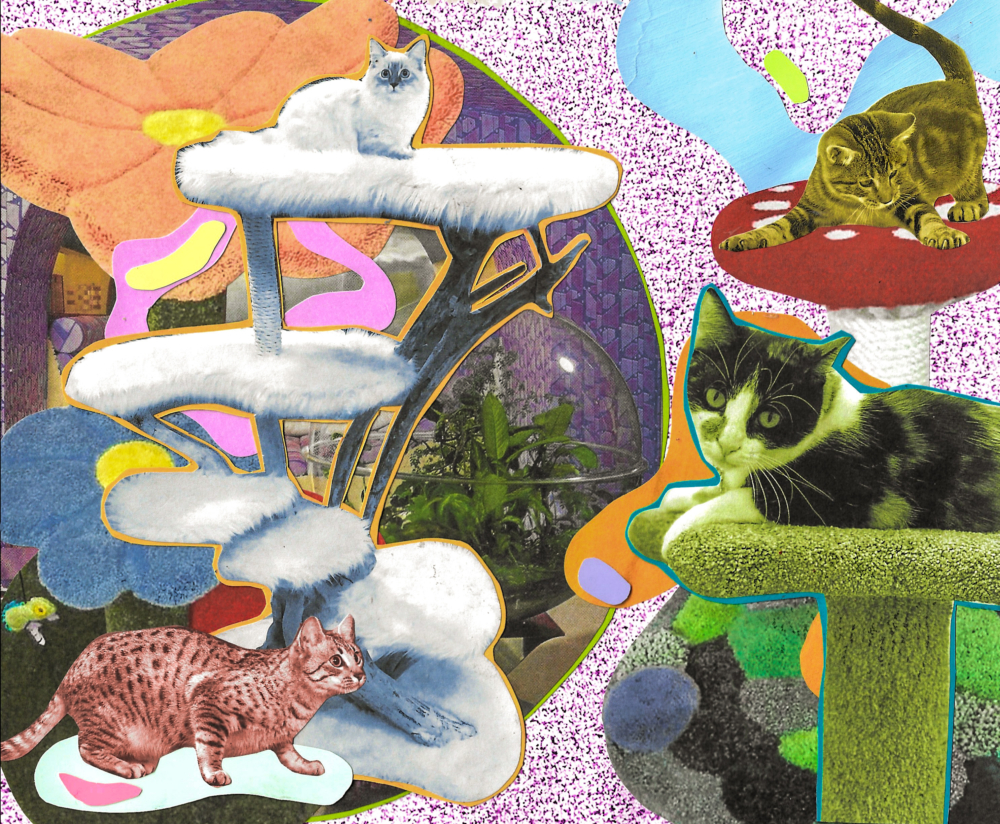 On Christmas morning, Ken Yuzva drove almost two hours from Cleveland, Ohio to Toledo, to personally deliver Annie Fox-Strauss’ custom cat tree. Ken spent 20 hours creating the tree made of custom-dyed sisal and carpeting, which makes it unsurprising that it clocked in at around $450. But those personal touches, and the hand delivery, also don’t come as much of a surprise once you learn that the Hollywood Kitty Company is a one-man show, and has been since its inception.

“Like in the movie I, Robot with Will Smith,” Ken explains, “I wish I could hire an army of freaking robots, then I could just download myself into them and have them be exactly like me, but better.”

Ken accepts the orders, works personally with each customer to figure out what is best for them both price and design-wise, and single-handedly creates all the cat creations. He also handcrafts the company’s booming social media page, which currently boasts more than 48,000 followers, after going viral on both Instagram and Twitter.

“The DoDo did a follow-up story on a cat named Wolfie and the headline was something like, ‘Special Needs Cat Gets Most Incredible Cat Tree On Earth.’ It totally went viral and people all over the world saw it. From the moment Wolfie’s owner, Jackie, made a post on her Instagram, I could just watch the new followers coming in every couple of seconds. I went from around 7,000 followers to about 20,000 something in a matter of two weeks.”

Truly, customized care is the heart and soul of this operation. Just weeks prior to her hand delivery, Annie placed an order for the tree which would serve as her one Christmas gift—a pink three-tiered cat tree and perch with a hanging catnip ice cream cone toy.

“Ken was really helpful. He knocked off a lot of the price and did upgrades on it. He calls you right after you place your order. And he’s very one-on-one with you and would text back pretty much right away and send you updates about it. I felt like a VIP,” Annie explains.

It’s an unconventional and time-consuming way to run a business, but right now, Ken explains, it’s all he can afford. With the high cost of materials and trying to keep the products as accessible as possible, there isn’t a large profit margin. But even outside of pricing, running a small business in the age of Amazon presents a different array of issues—especially revolving around unrealistic expectations with his schedule.

“People don’t really want to hear that I’m a one-man show. They’re like, ‘That doesn’t mean anything to me, I’ve been waiting this much time.’ A lot of people want to act like they’re the only customer that matters,” he laments.

The Hollywood Kitty Company was founded in 2003. Shortly after Ken moved to Los Angeles, he found himself in a pet store and thought after seeing the sub-par cat trees (and having experience as a custom carpet maker), “Man, I could totally do way better than that.”

From there, he created a website and began coming up with cat tree ideas, but what is most indicative of his creative mind was the Hollywood Kitty Company’s now defunct (but possibly soon to be resurrected) contest entitled, “The Hollywood Paws of Fame.”

As he describes it, “The idea was that customers who had ordered something, would either send in pictures of their cat, or I would take pictures if they were local, and then do a little collage with a bio of the cat. I called it The Hollywood Paws of Fame with The Golden Kitty Award. I digitized this Balinese cat sculpture and then I was going to hire a trophy company to make these things… I was just so out there with it. It reminds me of MTV in the early days. But, I didn’t have that many customers in the beginning. Every single month had to have enough entries. And you couldn’t skip a month because I had planned on doing a kitty of the year contest. I sort of used Playboy as a guideline with their whole Playmate of the Month.”

A lack of customers is no longer an issue; with the viral social media posts and his unique designs, he frequently gets new orders despite the high costs which range from $200 to $5000 depending on the design and customizations.

Much to his dismay, Ken doesn’t meet many of his customers, who tend to be from New York or California, and as he accurately quips, “There’s a lot of money in those two states and a lot of population. It’s pretty much why every president wants those votes, too.”

Like Ken, his customers tend to have a penchant for the kitschy and campy. It almost seems to be a requirement for purchase.

Odie Cibrian, a first-time customer from Southern California, discovered the Hollywood Kitty Company through Twitter. At the time, Odie had not adopted a cat yet, but they were planning on adopting soon. So in preparation for their new feline friend, they direct messaged Ken about a custom primary-color-themed star cat tree.

The design and color choices aligned with their personal aesthetic which Odie describes as, “Clown-based, so kind of more retro styles, like clowns, tend to have that pop of color.”

And while the cat tree is the priciest piece of furniture in their apartment, clocking in at $369 with shipping, it isn’t their only custom piece. In fact, most of their furniture is custom made in one way or another, whether that’s because their aunt made them color-blocked pillows or they painted a dresser bright orange.

The custom cat tree, while serving an important purpose for their cat, also serves as a centerpiece in their new apartment, “Everybody loves it. The moment they walk in, they’re like, ‘That is amazing.’ Even when I first got my cat, I have photos of him on it and it’s hung up in my office at work and literally, everybody makes fun of it. But I think once they see it in person and they see how well-made it is, I feel like that makes it more worth it to them.”

Outside of the simpler trees like the ones both Annie and Odie ordered, he gets ultra-custom orders from people all over the world including the Netherlands and Dubai. Currently he’s working on a custom design inspired by a 13th-century Armenian church in Turkey where the Turkish Van cat breed originated for a very special cat in Sacramento.