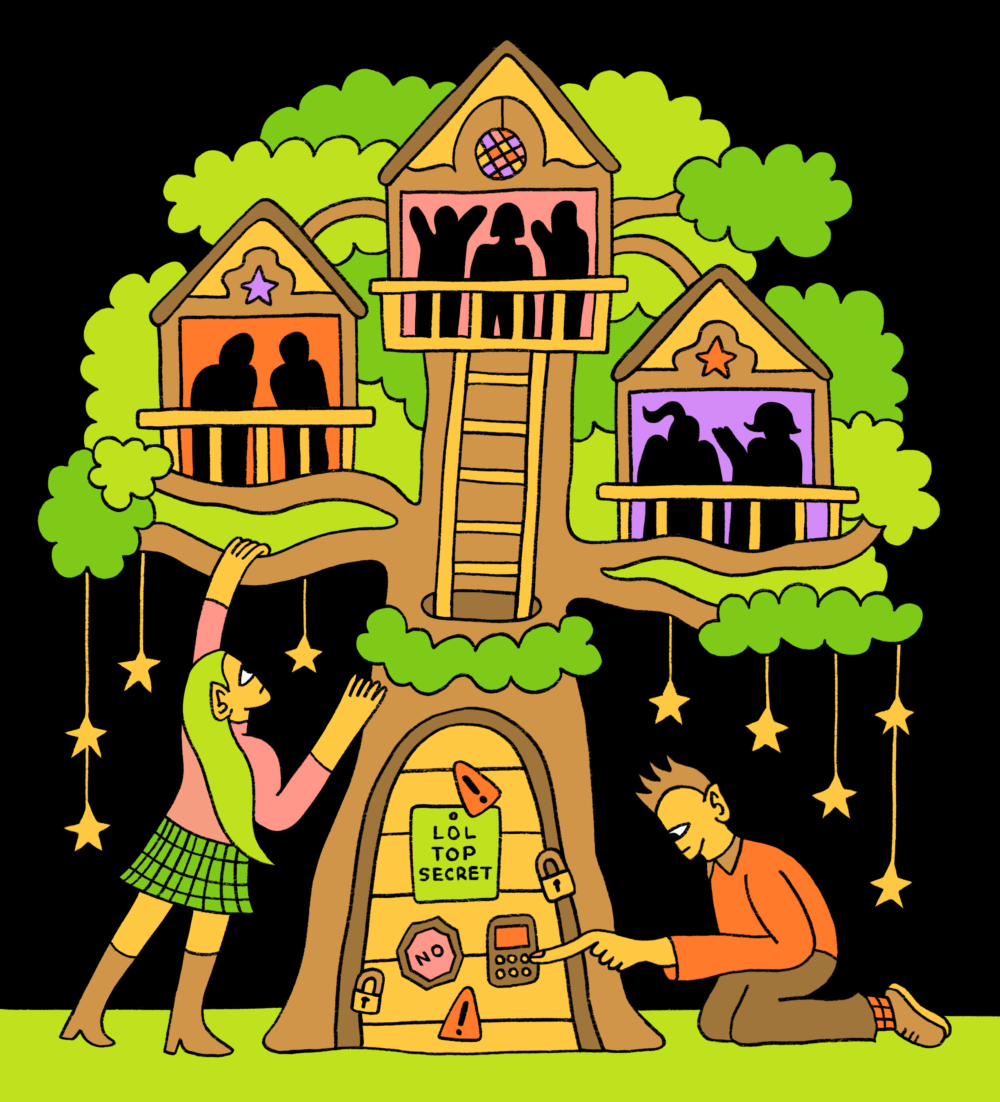 Shortly after New Years Day, despite warnings from health officials against meeting in large groups due to the spread of a deadly airborne virus, I found myself in a room with a thousand people. If that wasn’t enough, the people in this room I’d stumbled into were belting.  Yet, somehow in this crowd of spectators and saliva-spewing singers, the risk of COVID-19 transmission hovered at zero. How could this be?

Had the space I’d walked into — an audition room for a production of “Dreamgirls”—not been virtual, it certainly would have been a superspreader event. But on the app Clubhouse, thousands can gather from the comfort of their own phones to hear an actress named Samantha deliver her rendition of “One Night Only” to a panel of celebrity judges. Clubhouse, a buzzy new audio-only social media app founded in the early days of the pandemic, was likely not created with musical theatre in mind. But on Clubhouse, musicals are happening. So are masterclasses and marketing workshops. So is misogyny.

I first heard about Clubhouse in December 2020, nine months after its initial launch in April 2020. Clubhouse was founded by Stanford graduates Rohan Seth and Paul Davison, two engineers who envisioned a social media platform where users could gather online to chat live about any topic under the sun. To get onto the app, I had to get an invitation from a friend. That friend had, in turn, been invited by a different friend, a chain of connections which snaked all the way back to the circle of the founding few.

The “gated” nature of Clubhouse has earned the app a reputation as “an exclusive app for celebrities and Silicon Valley”, and “a playground for the elite.” This characterization is slightly unfair; Clubhouse is not invitation-only because it seeks to create an exclusive aura (like the hyper selective dating app Raya), but primarily because the infant app is still in beta. Clubhouse follows the lead of platforms like Gmail and Spotify in limiting their early user base to ensure the software can operate on a larger scale. To be fair, the elite— including Oprah and Jared Leto—do have Clubhouse accounts. It’s just hard to find them in the “playground” they apparently inhabit.

Rather, most “rooms” are filled with the distantly-connecteds, like me, who arrived out of curiosity and stayed on for the boisterous conversation and for the hope that we might be on the app when a celebrity such as “Zuck23” decides to drop into a room (as Mark Zuckerberg did this week). When Elon Musk and Mark Zuckerberg aren’t crashing the app by showing up unexpectedly, users can “drop into” audio-only chat rooms such as “Online Course & Mastermind Hacks in 2021,” “FutureWife MasterClass: SafeSpace 2 Ask Black Men Questions” and “CA restaurants reopening: Discussion w chefs/restaurateurs.” Most listeners just lurk, but if you’re called “onstage,” you’re able to chat for audiences that can number in the thousands. The one time I talked (in a room called “Is Clubhouse worth $30 billion) I felt an unfamiliar rush of total strangers listening to what I had to say.

Because users can’t hide behind their curated image (like on Instagram) or their curated wit (like on Twitter), Clubhouse feels refreshingly no-bullshit. But the app’s lack of moderation combined with the ephemerality of speech on Clubhouse could spell the app’s downfall. In July, The Verge reported that despite having launched its beta for months, Clubhouse still had not drafted Community Guidelines (It took Clubhouse until October, some six months after opening, to post Community Guidelines on their blog). The lack of clear community guidelines and moderation has meant offensive content has found fertile ground to proliferate on the app. When Taylor Lorenz, a technology reporter for The New York Times, spoke out in a Clubhouse room about online harassment she’d faced from venture capitalist Balaji Srinivasan (Srinivasan had called Lorenz a “disgraceful journalist”), Srinivasan accused Lorenz of “playing the woman card.” Shortly after the incident, Clubhouse founder Paul Davison liked a tweet reading “Honestly in this whole Taylor vs Balaji S., Clubhouse won.”

Since that altercation, Lorenz has been keeping a log of incidents on the platform, noting that the app has begun to add far-right bloggers and alleged sexual abusers to its community of beta testers. Lorenz’s repository contains screenshots of anti LGBTQ rhetoric on the app, as well as instances of misinformation (such as a doctor who claimed endometriosis could be cured through manifesting “intentions.”) Lorenz, as well as Tatiana Walk-Morris, a writer for Vanity Fair who wrote in December about racism and misogyny on Clubhouse, fears that without a clear plan for moderating its lawless audio rooms, Clubhouse could be a playground not only for elite investors but for misogynists and white supremacists.

It would be especially shameful if Clubhouse went the way of 4Chan because the new platform has gained unique traction with Black creators who have fostered communities of talent on the app. The upcoming production of “Dreamgirls” (premiering February 27 on the app), as well as past productions of “The Lion King” and planned future productions of “In The Heights” provides a great example of how Clubhouse creatives have invented new forms of performance on the app.  ““Dreamgirls”—a predominantly Black cast, which will have four different showings featuring different cast members—is making history casting both celebrities and amateurs and leveling the playing field for those already in show business and who aspire to be,” said Leroy Church, the associate producer of the show, in a recent interview. The easily created “stage” of Clubhouse presents a new model for hosting public performances, a model that can showcase professional level talent (one performance of “Dreamgirls” will feature Alex Newell, who starred as Unique on Glee) but one which maintains the casual, fun vibe of social media. Besides musical theatre, Clubhouse has generated its own micro-celebrities, many of them people of color, who host popularly attended rooms.

In a recent piece for The Root, writer Chris Lubin details how Clubhouse’s investors intentionally reached out to Black influencers and Black celebrities to generate hype for the app.  Lubin notes that though Black creators have essentially built Clubhouse into what it is, the app’s nonblack founders will reap the reward—as of January 2021, Clubhouse is now valued at $1B. As more incidents of racism and misogynoir occur on Clubhouse—such as a verbal assault reported by Clubhouse user Allyson Byrd—it’s clear that Clubhouse must make a firmer investment in the safety of the people who have made the app its venture fortune. The creativity and community on Clubhouse suggest that the app could be the next big thing. It’s Clubhouse’s job to make sure their app is not the next big horror story.