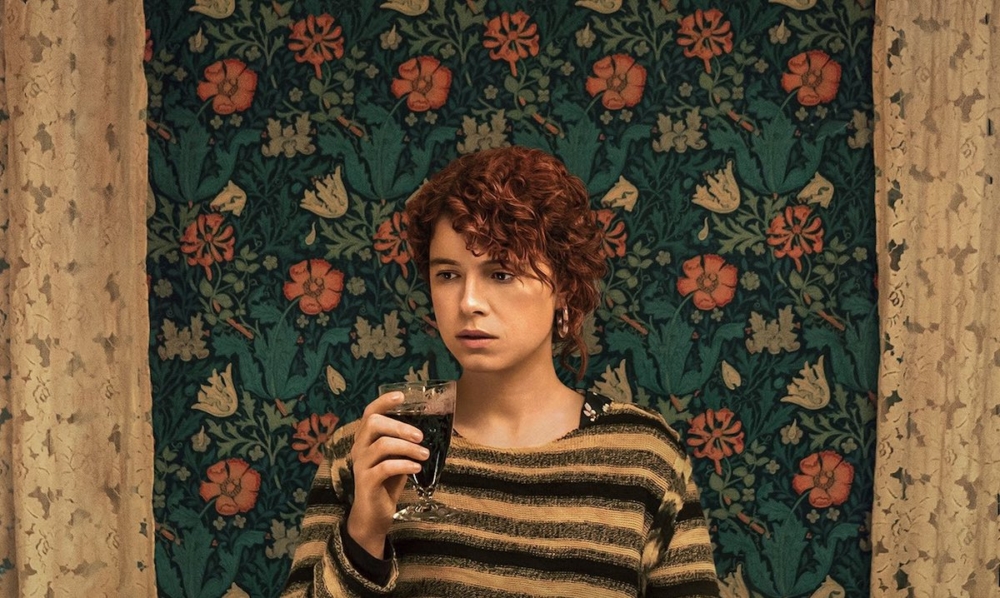 Shortly after finishing director Charlie Kaufman’s newest film, “I’m Thinking of Ending Things,” I did what I always do after watching reference-heavy, brain-bending, complex movies: I fled to Reddit.

To a cinema purist, perhaps leaning on Reddit to explain easter eggs in movies is “cheating.” But Kaufman’s self-conscious and intellectually exhausting films practically beg for annotation. After my first foray into Kaufman’s filmography — “Eternal Sunshine of the Spotless Mind,” which warped my brain and broke my heart — it was Reddit users who helped me parse the complex chronology of Joel and Clementine’s relationship. Slack-jawed after “Being John Malkovich,“ I turned to Reddit to explain the insanity I had just sat through. However, the plot of “I’m Thinking of Ending Things,” Kaufman’s first feature in five years, seemed simple enough at first to spare me the same debrief. Oh, was I wrong.

“I’m Thinking of Ending Things” follows a young woman (Jessie Buckley) who reluctantly joins her new-ish boyfriend Jake (Jesse Plemons) on a trip through rural Oklahoma to meet Jake’s parents, despite misgivings about the state of their relationship. As their car rolls through the snowy Sooner state, the erudite couple discusses Wordsworth and Italian railroad history as the young woman expresses her doubts about the relationship’s longevity in meditative voice overs. But once the couple arrives at Jake’s home, the film spirals wildly — and unsurprisingly — into Kaufman’s trademark surrealism and I found myself again combing through Reddit as the credits rolled. None of the 2,300 comments on the “official discussion thread,” however, answered what I wanted to know most about the film: was Jessie Buckley’s character in “I’m Thinking of Ending Things” supposed to be queer?

I say “Buckley’s character” because the young woman who narrates much of “I’m Thinking of Ending Things” doesn’t actually have a name. Rather, she has many — Jake refers to her throughout their road trip as Louisa, Lucia, Lucy, Amy and even Yvonne. Once they sit down for dinner, Jake introduces her to his parents alternately as a poet and painter, a student of physics or of gerontology. Buckley’s costume changes and accent switches would give a continuity editor an aneurysm. But these inconsistencies are intentional: by the end of the film (spoilers ahead!) it becomes clear that Louisa/Lucia/Lucy/Amy/Yvonne is not a single woman, but a composite figment of Jake’s imagination. The pair’s car trip is likely the hallucination of a much older Jake, whose ungratifying work as a janitor at his former high school has led him to consider suicide (hence the double meaning of the phrase “I’m Thinking of Ending Things”). Loveless and lonely, Jake fantasizes extensively about what a relationship with Buckley’s character might have looked like.

The actual connection between the young woman and Jake, we learn eventually from Buckley’s character, is barely existent. “We never even talked, is the truth,” Buckley’s character says with frustration in one of the film’s climactic scenes. “I’m not sure I registered him. I was there with my girlfriend, we were celebrating our anniversary, stopped in for a drink and then this guy kept looking at me. It’s a nuisance. You can’t even go for a drink, always being looked at. He was a creeper, you know?”‘

There it was.  “I was there with my girlfriend, we were celebrating our anniversary.” Nothing previously in the film—besides, perhaps, a strange interaction where a teenage drive-thru worker calls Buckley “very attractive”—suggested Buckley’s character might be queer. But nothing before had suggested that the relationship between Jake and his “girlfriend” was as scant as a glance in a bar, either and in filmmaking as dense as Kaufman’s, it seemed unlikely that any detail would be unintentional.  I posted my query on Reddit. “In any case, it doesn’t even matter,” was the reply I received. “She’s not a real person. There are no facts about her.”

One of the challenges of “I’m Thinking of Ending Things” and the likely reason Kaufman was interested in the project, is that Jessie Buckley’s young woman is written explicitly as a concept. The story thus depicts an extreme version of a struggle that occupies a lot of onscreen women’s time in self-conscious films: the effort to assert their own reality. Kaufman’s own character once put it this way: “Too many guys think I’m a concept, or I complete them, or I’m gonna make them alive,” remarks red-haired Clementine in an early scene of “Eternal Sunshine of the Spotless Mind.” “But I’m just a fucked-up girl who’s lookin’ for my own peace of mind; don’t assign me yours.”

The prospect that Buckley actually plays a concept—that is, a real woman acts as a concept who behaves as a real woman, who is, of course, fictional—is a gold mine for a screenwriter as meta as Kaufman. Kaufman often explores postmodernism in his work—Kaufman’s 2002 film “Adaptation” is literally about a screenwriter named Charlie Kaufman—and adapting “I’m Thinking of Ending Things,” based on Iain Reid’s 2016 novel of the same name, permits Kaufman to tackle his usual questions about the blurred lines between reality and representation through a new lens: feminist film critique. Throughout the film, Kaufman zealously demonstrates through references to film theory that Jake’s idealistic vision of his girlfriend is a symptom of general mass media misogyny: after one character becomes engrossed in a scene from a corny rom-com, Buckley briefly face-swaps with the film-within-a-film’s lead actress as she and Jake discuss Guy Debord’s essay “The Society of the Spectacle.” And when Jake and his girlfriend begin to kiss in their car, Jake angrily realizes the couple is being watched through a chink in a wall, likely a reference to the most cited work of feminist film criticism, Laura Mulvey’s “Visual Pleasure and the Narrative Cinema,” which posits that moviegoers in a dark cinema are akin to voyeurs at a peephole.

Kaufman’s intertextual interventions, however, don’t empower Buckley’s character in the film so much as flaunt Kaufman’s own conscientiousness as a male filmmaker seeking to trouble the male gaze in his own work. In a recent interview, Kaufman states of Buckley’s character, “I wanted her to not be a slave to this thing that’s happening to her. I wanted her to resist.” Yet the young woman’s attempts to gain agency by resisting her own idealization — by disagreeing with Jake or blowing raspberries at him – are always overshadowed by Kaufman’s own experimental efforts towards exemplifying the harmful nature of voyeuristic cinema. It’s not ever Buckley who resists Jake’s projected fantasies; it’s Kaufman.

This is not necessarily a bad thing; feminist critics such as Mulvey argue that such resistance is uniquely Kaufman’s job, as the harmful ways society views women proliferate even more in the editing room or in the cinema house than in the script itself. To put it another way—what can Buckley’s character possibly say within the film say to resist her circumstances? How can a concept rebel against her own ‘concept-hood’? Singlehandedly deflecting the gendered expectations imposed on society at large by mass culture is a daunting task, yet it’s a task both Clementine and the young woman in “I’m Thinking of Ending Things” face. If the young woman becomes irritable and disagreeable, Jake concedes to her: he loves her all the more for her distaste of him and in doing so, wields immense power over her with his unrelenting persistence. Here, it’s almost as if “I’m Thinking of Ending Things” converses with “Eternal Sunshine”: in the final scene of the latter, Joel, who is seeking to restart his relationship with Clementine despite her objections, says, “I can’t see anything I don’t like about you.” Exasperated, Clementine cries, “But you will!” To which Joel says, with a slight raise of his eyebrows and a smirk lurking at the corner of his mouth: “Okay.”

It’s not, like the Reddit user suggests, that “nothing matters” about Buckley’s character. It’s that when she is entrapped within Jake’s fantasy of her, the expectations that come with heterosexual romance, heightened by misleading media depictions of heterosexual love, are too deeply ingrained in the fabric of their relationship for Buckley to rebel against them in any fruitful manner. Kaufman’s shortcoming is to think this dynamic to death and thus declare with melancholy: “All love is doomed.” The young woman’s potential real-life queerness—the most interesting resistance to the heterosexual expectations she grapples with throughout the movie  —is reduced to a one-line footnote. Bizarrely, Kaufman all but abandons Buckley’s character—who had up until that point been the film’s protagonist—after she finally resists against Jake and instead devotes the last twenty minutes of the film to a dream sequence which rather emphasizes Jake’s failures at romance.

My frustration with Kaufman’s insubstantial resolution of Buckley’s character and my refusal to take “It doesn’t even matter” as an answer about her character’s queerness, stemmed from the fact that Buckley’s character was all too real to me. I had once been in a relationship not unlike the one Jake has with his girlfriend and like his girlfriend, I too had thought of ending things. My boyfriend was intelligent, well-read, kind and sensitive—yet despite his bevy of wonderful qualities (many of which I still miss), I still often felt a discomfort about the nature of our relationship, a discomfort which had pervaded my past heterosexual relationships and which Buckley gives voice to again and again throughout the film. Buckley’s character may not have been real, but she felt real uncertainty about whether her interests and passions (film criticism, poetry, physics, painting) simply exist for Jake’s approval, real awkwardness when she is handed Jake’s mother’s nightgown to wear as lingerie, real reluctance when Jake begins to kiss her in his parked car and real resignation when she decides to kiss him anyway. It mattered to me whether Buckley’s character was queer because queerness was the name I gave these very real feelings when they appeared time and again in my own life. And by writing off Buckley’s queerness, feelings and romantic concerns and recentering the film’s final chapter exclusively on Jake’s woes, Kaufman regrettably perpetuates the same gimmicky treatment of women he just busted his directorial balls trying to critique.

Kaufman had no qualms overstuffing “I’m Thinking of Ending Things” with animated pigs, lengthy ballet sequences, references to David Foster Wallace and verbatim quotations of film criticism. Yet, in filling the film to the brim with references, including ones to feminist film criticism, Kaufman sacrifices the opportunity to focus even more narrowly on the relationship between Plemons and Buckley, to engage with the questions of romance and personhood and expectation instead of just throwing them to the winds. Kaufman’s decision to leave Buckley’s character unresolved is why that commenter on Reddit was able to say “She’s not a real person. It doesn’t matter anyway.” I don’t believe that Buckley’s character traits, including her implied queerness, don’t matter. What I do believe: Kaufman could have made them matter and didn’t.

2 replys to Self-Conscious and Intellectually Exhausting: A review of “I’m Thinking of Ending Things”