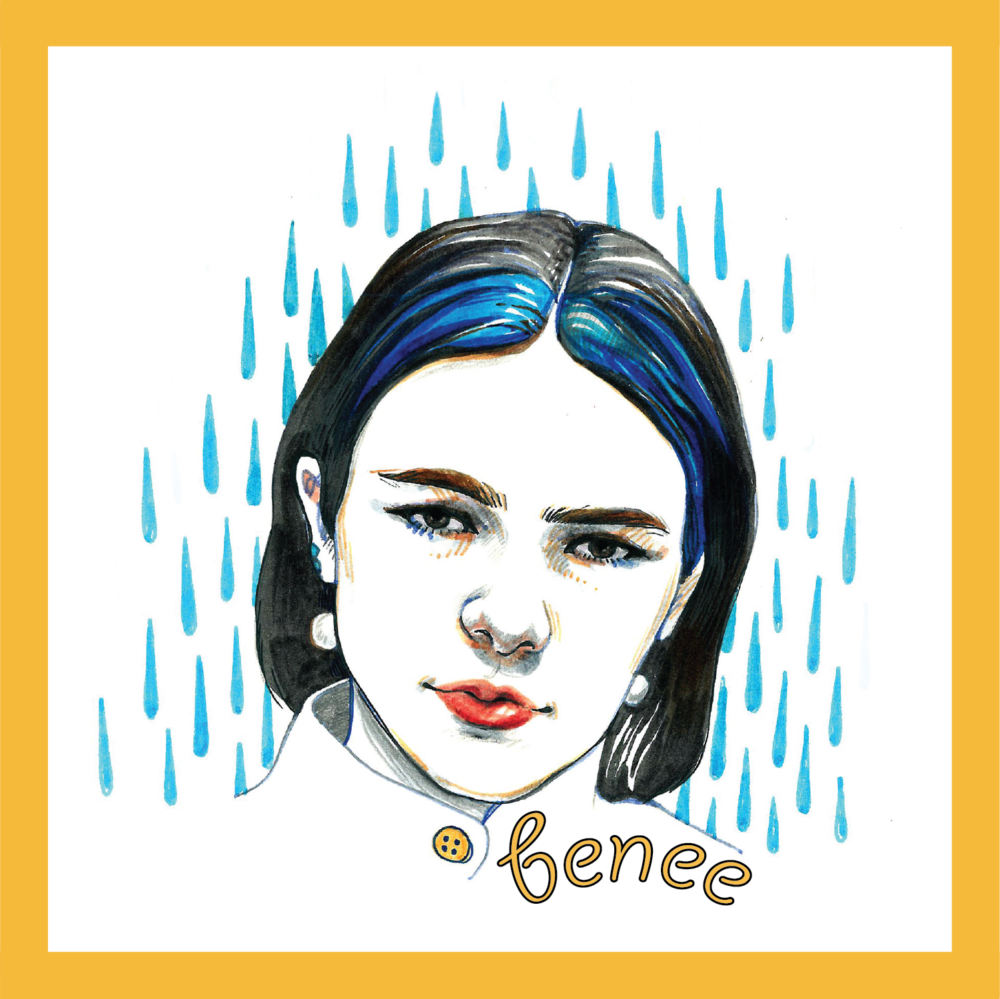 The Auckland, New Zealand native and I are both twenty years old. While Bennett is pursuing a burgeoning, colorful career in the pop music industry, I am in my second year of college.  Already BENEE has a following across the globe, a collaboration with one of America’s favorite lo fi bedroom pop stars, an upcoming stateside tour and is the presiding queen of the two-tone black and platinum hair dye. My hair, woefully, remains a very neutral, basic brown.

If you were to search “BENEE” on your streaming service of choice (which I highly recommend that you do), you would be able to count the number of songs attributed to her on your two hands. Her current anthems are low in numbers, but high in energy and promise. Only three weeks into age twenty, her sound is nuanced and genuine, but most of all, it’s fun. Even when dealing with darker themes such as heartbreak and lust, her sound remains optimistic without losing maturity; a testament to her singularity.

This past Tuesday, BENEE endured not only the mediocre long distance phone connection, but my raspy, “it could be a cold or you could be a chainsmoker” voice (I had a cold). She was bubbly, giggly and seemed more than happy to answer my questions about her brief stint as a university student, what inspires her music and her upcoming plans.

Zoe Allen: You started out on SoundCloud and dropped out of your first year of university after about two weeks. Were you really sure of yourself and your music at the time, or were you just sure you did not want to be at university?

B: And I really wanted to go to university. I had made a couple of songs and I had been working in the studio and I had released a song. I was [at university] and it just felt like it was becoming a distraction for me and what I actually wanted to do. But I wasn’t super sure of my music because I only had one song out and that wasn’t popping off. I knew that I wanted to give music a shot and I just felt like it wasn’t the right time to go to [university].

ZA: You spoke about that “one song,” but last year, in 2019, you released not only one, but two EP’s in the span of about five months. Could you tell me a little bit about what that process was like? What are your plans in 2020 to follow up such a major year?

B: Last year, I was super happy with the way that the music came out and just kind of the idea of constantly having songs for people to listen to, because that’s what I personally love. I love releasing music all the time. I think that kinda worked last year, but now I definitely want to work towards maybe releasing like a bigger project in one go. I have a lot of songs that I’ve been sitting on and I’m also in the process right now of making a whole lot of music at home. I’m just super excited.

ZA: A “bigger project?” Could you elaborate on that a little bit?

B: I don’t really know if I’m allowed. I’m trying to be mysterious about it, you feel me?

B: Definitely just bigger than an EP.

ZA: Speaking of “bigger,” you just released your video for “Supalonely,” which is a collaboration with Gus Dapperton, who is pretty big over here [in the States]. The colors and the aesthetics and the overall sound of the song seems to be the opposite of what you’re actually singing about. Was that intentional and what would you say is the message of that song and that video?

B: Writing the song, I’m not writing it about a very happy topic, it was a breakup kind of period where I was pretty fresh out of a relationship and I was writing in L.A. I was obviously sad and I was like, ‘I could make a whole lot of sad songs right now, but I’m tempted to try making a super self-deprecating version of a sad song.’ I was super playful in my writing and I think when it came to finding a director, I ended up using this guy called Rome and we worked together. I told him exactly what the song was about and how it was kind of a happy, fun, upbeat song and I wanted it to feel happy but I wasn’t really writing it about something happy at all. I think he fully got that and translated it into this really colorful and fun video.

ZA: With that collaboration, you’re talking about a very personal topic to be writing about. How did you get Gus to be your collaborator for this song and video?

B: I have been a fan of Gus for quite awhile and I love his work. We got in contact through this guy Dan from Republic, who knows him quite well and I’ve worked really positively with him. He was kinda like, “oh, Gus likes your music and stuff.” And I was like, “oh my god, that’s crazy.” He asked me if I would ever think of maybe working with him. I was like, “heck yeah.” I thought [“Supalonely”] was finished, but he was like, “[Gus] loves this song,” and I was like okay, “I’ll clear a little bridge for him to add a little thang in there.”

ZA: I know this is like asking you to pick a favorite child, but what has been your favorite song to write, record, or release?

B: I love that favorite child [analogy], because they are like that. Actually, it’s probably “Blu.” I prefer to write my sadder songs. The thoughts just flow more easily and I like the production on that song a lot. It’s a really sad one, but I like the kind of melancholic guitar production.

B: I think so, I love the idea of mixing genres. I have kind of an eclectic taste I think and these thoughts in many areas, not just music. I’ve described my music as a crispy apple, which doesn’t really make any sense. I love fresh music where you can have a blend, hearing things that are a little bit weird and fresh and crispy like an apple that you haven’t tried before.

ZA: You said it doesn’t make sense, but when you explain it makes perfect sense to me. We just talked about collaborating with Gus, but if you could pick one person or two people to collaborate with this year, any time, who do you think it would be?

B: Ooh. I have dream collaborations, but that would never happen. I’m a big fan of Radiohead. I love Daniel Caesar, he’d be cool, I reckon. I don’t know though, there are a ton. Definitely Radiohead would be like a dream that I know would not happen, but a dream.

ZA: I feel like with Radiohead, you have very similar lyrical content, but your style, in terms of how you convey those lyrics, is so different. So my last question for you is kind of a statement too–you’re coming to the U.S. on a tour in the spring. Did you expect your music to make it across the globe? Are you excited? What are you looking forward to about this tour in the States?

B: I still don’t really understand it. Even announcing the tour, it just doesn’t feel very real. It’s happening and I’m super stoked and very excited to come to these places and some of the shows have already sold out. That, to me, has been a wonder, like what the heck is happening.

ZA: You’ve had to upgrade your venues, haven’t you?

B: Yeah, that’s crazy. I didn’t even think that many people would come to my shows. It’s pretty cool.

BENEE’s music can be found on all streaming platforms. To view her U.S. tour dates, click here.