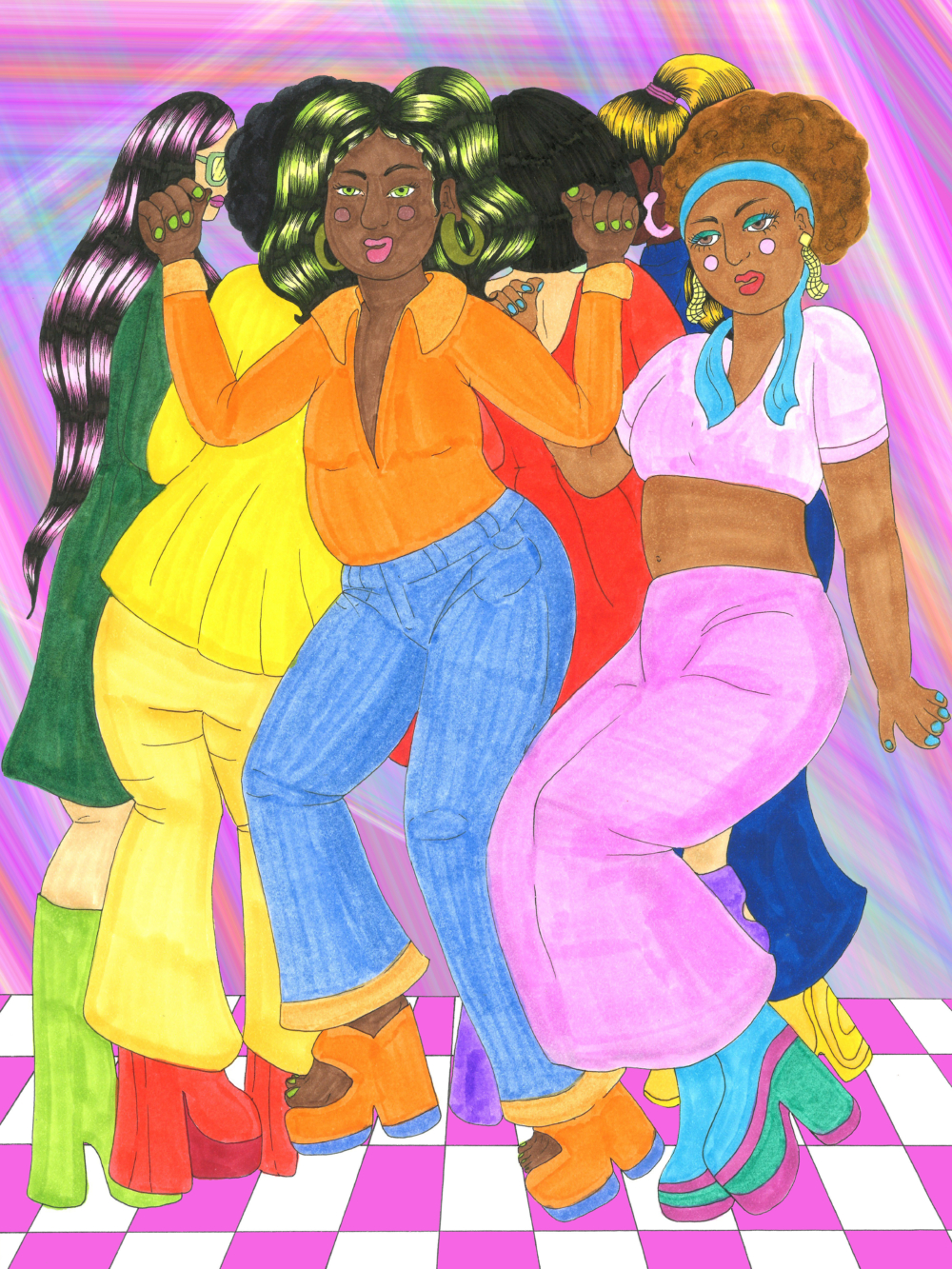 Why don’t people fight for disco?

Disco itself was an eternal, glamorous fight. It was the fight. Yet people do not fight for it like the way they fight for other music. “Long live rock ‘n roll,” “Punk isn’t dead.” Well, same to disco and it also isn’t dead.

Something like disco doesn’t just die. Disco endures—it defies, it riots. In the continuation of unloving catastrophes that have perpetually befallen humanity, love has always been the answer. And disco was our greatest way of how we communicated that answer.

Disco wasn’t just a music genre. It was an international dialogue without need for translators—a global phenomenon of style, movement, aesthetics. Disco was escapism, a culmination of both joy and pain in one climax. It was a call to be seen and heard, to be fearless and unapologetic, for those who were always made to feel shameful, fearful, invisible.

Unlike punk and rock ‘n roll, disco has never been revered in history for its lasting cultural impact. Many Americans do not look back fondly on disco—it was too kitschy, tacky, unmanly. Others look back on it with such hostility that it attests to their own character more than anything.

Disco was a radical Black, queer, feminist revolution. It gave a platform to artists and performers of these backgrounds; it was the future and people weren’t ready for it. Slander against disco is rooted in the backlash that occurred at its peak over four decades ago: anti-queer, anti-color, anti-woman.

Disco came of age in the aftermath of the 1960’s counterculture movement. This was post-Civil Rights and Stonewall Riots, but still amid second-wave feminism and the war in Vietnam. Think Nixon, Ford, Carter; each president embodying the 1970’s in his own abysmal way, from constitutional corruption and one energy or hostage crisis after another, to overall incompetent management and leadership of the country.

All of the hope, enthusiasm and vigour from the early 1960’s had dissipated. The 1970’s became an exhausted decade, devoid of hope and full of mistrust instead. Collectively people were lost, wandering around aimlessly. The decade’s economic stagnation resulted in a gradual social decay—including but not limited to poverty and high rates of crimes—that effectively shaped who and what disco came to be. Disco thus became the direction; it filled the void when people were waiting for something to happen, to change.

It’s generally accepted that disco was born on Valentine’s Day of 1970 in New York City, with David Manusco’s invitation-only underground dance party called “The Loft.” Although disco was the lovechild of different communities, New York was where its heart lay, staying alive by pumping its blood and oxygen to the rest of the world.

New York spaces like Studio 54—VIP guestlist, restrictive and subjective entrance policies, open drug use, sex downstairs—and The Gallery—a Manhattan nightclub opened in 1973 by Studio 54 regular, Nicky Siano, where Grace Jones first debuted as a performer—shaped the scene of disco. It’s been said that one New Year’s Eve party at Studio 54 involved four tons of glitter drenched on the floor of the club, and that it could still be traced months later on attendees’ clothes. Ian Schrager, the owner, said it was like “standing on stardust.”

Discotheques like these changed the way we moved. Beyond dance moves like the Bump and the New York Hustle, no longer was the dancefloor segregated or relegated to straight couples only. It became an altar for mass celebration, a divine communion of all people singing and moving in unison. They weren’t lost and aimless anymore. They had found each other and the euphoria that comes from such a phenomenon.

Performers that were queer, transgender, Black, Latin, women, or any intersection of these identities were able to reclaim space and define themselves in ways that weren’t possible before disco. For instance, the kitschy proved itself to be subversive—macho gayness gained visibility when it was brought to prime-time entertainment. The voice of disco itself was feminine, specifically Black and feminine, held down by disco divas like Donna Summer, Gloria Gaynor, and Thelma Houston to name a few.

Similar to love having no borders, disco also had none. Disco was the first of its kind to promote global collaborations in music, fusing sounds and styles from all over the world. In doing so, it ultimately impacted many different cultures both musically and socially. It went from being a lovefest en masse in Greenwich Village to being a major mode of communication and connections in the global village. (Was Marshall McLuhan the disco diva of sociology?)

Musically, disco hadn’t even existed as a genre prior to “Saturday Night Fever.” Billboard’s Dance Club Songs chart was first launched as the Disco Action Top 30 chart in 1976; its first number-one song was “You Should Be Dancing” by The Bee Gees. Disco was Black R&B and soul music with Latin influences, and it did not ask their performers—especially Black women—to tone themselves down and be more “radio friendly.”

Perhaps my favorite reaction to disco was that of fashion. What differentiated the 1960’s counterculture movement from the 1970’s disco movement was sophistication. Hippie culture’s quest for personal enlightenment, evolution, and sexual revolution accessorized by Birkenstocks and country living was traded in for Halston and urbane living, albeit with that same desire to be personally evolved and sexually liberated.

There’s something about the bold, unapologetically over-the-top themes in disco fashion that still hold us captive today. It was luxurious, sexy, and just a bit vulgar. Chloé, a designer label with denim pieces that often take cues from the 1970’s, produced my favorite pair of bell-bottom jeans. There’s something about these flared pants that always seem to empower me everytime I wear them. They make me feel unstoppable, which is something that I associate with the kickass style icons of the time—Cher, Diana Ross, Meiko Kaji, Charlie’s Angels, Cherie Chung, ABBA.

“He’s the Greatest Dancer” (1979) by Sister Sledge perfectly embodies the lustful, gritty glamour that disco evoked: “He wears the finest clothes, the best designers heaven knows / Ooh, from his head down to his toes / Halston, Gucci, Fiorucci / He looks like a still, that man is dressed to kill.” It was all about extravagance, escapism, glitter vomit, and unfettered fun.

Take “Disco Demolition Night” at Chicago’s Comiskey Park in 1979 for example. Not only were disco records demolished at this White Sox game, but records by all kinds of Black and queer artists from other decades were destroyed. Discotheques in Chicago soon after were replaced with Western-themed bars and rock music joints. Disco Demolition Night was more than an MLB promotion—it was its own State of the Union Address: straight white men, take back your power. Nile Rodgers, music producer and former guitarist for the disco band Chic, likened this event to a Nazi book-burning. It became disco’s turning point, precipitating its decline in 1979 and 1980.

Disco’s demise did not mean that it entirely died, however. Disco artists continued under what record labels began to market simply as dance music. The very best of it survived. Everything that we now take for granted in electronic dance music happened under disco: the 12-inch single, the way that a sound system is configured, the modern remix.

Disco became a refugee from its own place of origins. It never went out in the UK, and what came from it? New wave music, or what British journalists renamed as “synthpop” in the early 1980’s. It was pop-rock music that moved away from the blues and incorporated disco and electronic music instead.

In early 1980’s Chicago, when the disco crowd was forced underground, house music was born. Early house music took many cues from disco, but it was more electronic and minimalistic than its predecessor. Needless to say, the disco beat has persisted in music, from new wave hits like “Blue Monday” by New Order to mixes we hear in the club today.

Recently I saw Studio 54 legend Cerrone, one of Europe’s most influential disco producers of the 70’s and 80’s, perform at (le) poisson rouge in Greenwich Village. He played some of his classics, such as “Supernature” and “Love in C Minor” (a personal favorite), as well as his more recent music. The crowd ranged from men around Cerrone’s age—one even brought an original vinyl of Cerrone’s music from the 70’s—and millennials working at tech startups to a particularly large friend group that was racially mixed, very groovy, and very queer. With my own artist-friends from London and Curaçao, I befriended other artists from Amsterdam, Paris and Madrid. Typical disco-goers.

One scene strikes me as unforgettable. There was a tall, lithe woman with thick bangs and heavy eyeliner dancing with someone petite and wiry sporting natural hair. A circle formed around them; they were intoxicating in the way they danced with each other. They moved in sync and predicted what the other would do next, taking turns leading and following. It was a ritual, an offering to the disco gods, I’m sure. Nobody could take their eyes off of them. They were simply stunning and embodied the very essence of disco.

Fueled by tequila and dressed in my white lace bell bottoms and Prada platforms (my boogie shoes), I too took to the dancefloor and let the music take over me. I scanned my surroundings and for once I couldn’t help but see the best in everyone. Courage, love, joy. So long as the music didn’t stop, everyone was who they wanted to be. Whether they were old-timers or time-travellers, it really was the lovefest en masse that I had only ever heard about before. That night I witnessed it, I was part of it, I was in the divine communion. Heaven knows it’s the way it should be.