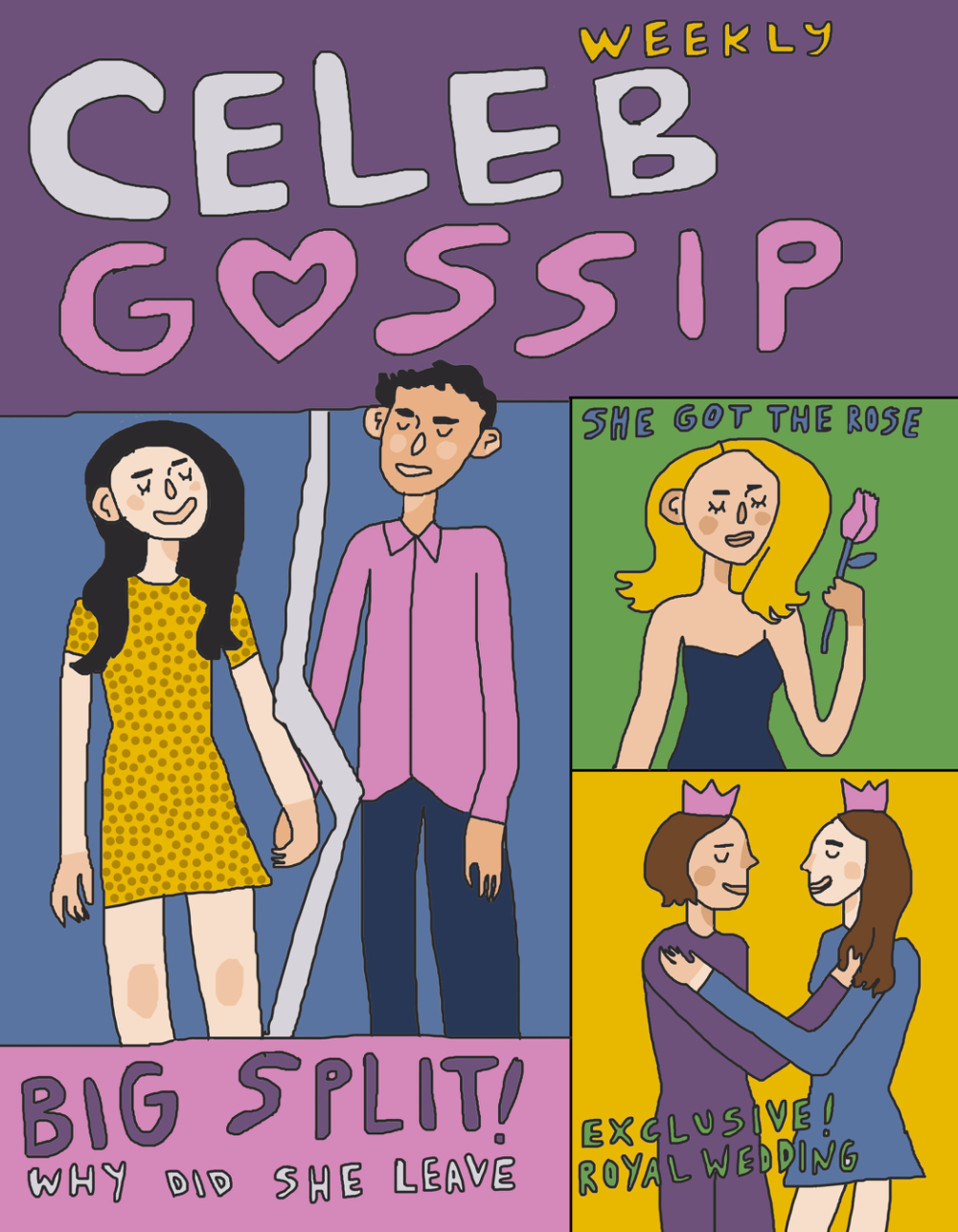 The spectacle of a Hollywood relationship, the whirlwind of couple photos, the grand, public gestures of “love.” Can we even coin it that without second guessing the truth? We are obsessed with everything about these “It-couples,” every infidelity and every engagement. Their lives, even the most intimate parts of them, consume the public imagination. With such an opportunity to capitalize on romance, all aspects of celebrity relationships are scrutinized on the basis of their validity.

Just how artificial is a relationship between two of the most influential celebrities of any given era? The concept of the Hollywood “It-couple” has transcended every decade, manifesting itself in different bodies, but never ceasing to capture the public eye for better or for worse. Humphrey Bogart and Lauren Bacall. John Lennon and Yoko Ono. Princess Diana and Prince Charles. Britney Spears and Justin Timberlake. Brad Pitt and Angelina Jolie. Kanye West and Kim Kardashian.

The obsession behind celebrity couples is born from the reality that their combined lives appear to be to good to be true, materialistically far better than any romance that we deem ourselves to be worthy of. We invest time and energy into these relationships that are far removed from our immediate existence, but also stockpile skepticism that can be made available at any given moment. We believe in this love, but we don’t believe in this love. With the knowledge that Kris Jenner is seemingly getting younger by the day, apprehension is advised.

The time and energy that we invest in these relationships is often not the pure kind; we embrace the spectacle because it’s interesting, not because we’re romantics that are yearning to see true love flourish.

Case study 1: Love as a game show
Featuring The Bachelor, Bachelorette and other reality dating shows

How authentic is love that is born within the grounds of a mansion shared with 20 plus other contestants vying for that very same love? For that matter, how authentic is love that has to be competed for? ABC has capitalized on the concept of love as a game show. “The Bachelor” and “The Bachelorette” are some of the most watched shows on television, each season highly anticipated. And these two American television staples just skim the surface of reality dating shows: “Ex on the Beach,” “Love Island,” “Are You the One?” and a plethora of other romantic reality TV can be found at the click of a remote. These shows captures the public imagination weekly as we become entrenched in every heartbreak and intimacy, soaking in the drama, cheering for the contestants but not quite sure if they are searching for love, glory, or both.

But anticipation and viewership does not exempt a show from being problematic; at its very core, it perpetuates the notion that love is a contest. It pits women and men against each other in a battle for love and fame. The public picks favorites, roots for one over another, believing that we know best about what our beloved Bachelor or Bachelorette is searching for in a romantic relationship.

We think we know these women and men, that we can define who they are with simple adjectives based on their onscreen performance. We know their hometown, their profession, how good they look in a gown or a suit, but we don’t truly know them. Does the person whose love they are competing for know them any better than us, the captive audience? Is it possible to come to love someone in such an artificial setting? The lucky winner of these dating shows might have beaten out 20 plus other contestants, but the world is far larger than the fishbowl that is the Bachelor Mansion.

Case study 2: The Kardashian romance merry-go-round
An amorous analysis of the most powerful family of the 21st century

When I pitched this article, I thought it was clever and timely because the episode of “Keeping Up with the Kardashians” in which Tristan Thompson’s infidelity was addressed had just aired. Little did I know that the Khloé/Tristan Thompson drama would escalate far beyond the predictable realm into “Kylie’s best-friend Jordyn Woods is Tristan’s mistress” territory. When the news broke that Woods–who is so reliant on the KarJenner clan that she literally lives in Kylie’s house–had cheated with the father of Khloé’s child, the people of the Internet reacted the only way we know how: we memed it, tweeted it, sent a hundred texts a minute about it. Conspiracies arose (as they always do when anything absolutely absurd happens in their family) that Kris Jenner was behind the whole thing, basking in the publicity. Truthfully, it’s theorized over for good reason; the self proclaimed “Momager” is a savvy, savage businesswomen who possesses the full knowledge that infedelity, even if it involves her own daughter, can be capitalized on. As a collective, we have reached a level of cynicism so grand that we believe it to be more reasonable for Kris Jenner, mom, to be behind a publicity stunt than to actually believe in the validity of love.

We bask in the pain of celebrity love scandals and heartbreak; we soak in every moment and appropriate the love lives of the famous for our own personal entertainment. The world is a lot more interesting when reality television is not just confined to our television screens, but can also be found on Daily Mail or Twitter. The offscreen–supposedly real–drama is just as juicy as a produced episode, sometimes even more so. Reality television never stops working, and those that participate in this form of entertainment quickly realize that their entire lives are made public, but not in the same way that most other entertainers lives are. Kris Jenner can turn a profit off a scandal, off an affair, off of business that for most other people would be entirely intimate. Love is a business, and for this reason, I cannot fully invest myself in the integrity of these relationships. And for that, I feel truly sorry. How awful to not believe in love, to have been conditioned to not believe in love.

Is it cynicism or reason? I struggle to discern between the two, wishing that I could fully believe in this kind of Hollywood love but also aware that apprehension is necessary. What a shame to be in this position, to question the validity of love. But I have been conditioned to be this way, to become more of a skeptic with each E News post, with each petty tweet.

In the era of love and reality television, I often feel like I’m living in Plato’s cave allegory from his famous dialogue “The Republic.” Socrates, Plato’s protagonist and real life mentor, asserts that most human beings are simply prisoners in a cave, believing in what is projected before them, unable to discern the truth or purely choosing to live in ignorance. Is the love I see before me the truth? Am I simply a prisoner in Plato’s cave, watching projections of love dance before me, believing in their validity? Is everyone who exercises skepticism breaking from their shackles, ascending from imagination to understanding? Or by questioning the validity of these relationships, am I nothing more than a miserable cynic?