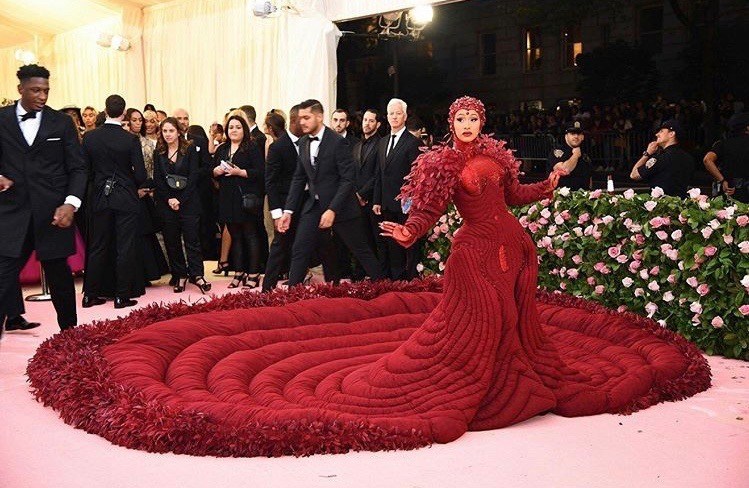 Lady Gaga embraced her eclectic, yet stunning past in not just one, but three outfits on the red carpet. Serena Williams wore neon yellow Off-White x Nike sneakers that perfectly complimented her floral Versace gown of the same color. Billy Porter’s gold-embellished, royal entrance was more like an ascension from heaven, or Ancient Egypt–wings included. Jeremy Scott and Moschino dressed singer Katy Perry as a real-life chandelier. Harry Styles went sheer in a pussy-bow blouse (picture lace accents, impeccable nail polish, a singular pearl earring and clunky rings all by Gucci) and it was absolutely elegant.

It’s almost redundant to state the event that these fashion feats headlined; there’s really only one it could be: the Met Gala.

This year’s theme, “Camp: Notes on Fashion,” was co-chaired by Gaga, Williams Alessandro Michele and Styles, along with “Vogue” Editor-in-Chief Anna Wintour (who was outfitted in head to toe Chanel).

Just what exactly is “camp?” Andrew Bolton, current Head Curator of the Metropolitan Museum of Art’s Costume Institute, said in a 2018 interview with “Vogue” that he thinks “one of the defining elements of camp are the lists that people keep providing…the endless list is, finally, the definite mark of camp.” So really, “camp” is what you make of it.

The event saw A-list celebrities from every field flaunt their originality and style knowledge. Some were nuanced and simple. Others were daring and bold. Floral dresses seemed to be a favorite for not only Williams, but the entire Leibovitz clan minus Annie herself, who chose to don a simple two-piece suit (Florals? For spring? Groundbreaking).

The annual Gala, which serves as a fundraiser for the Met, is my career goal. I have yet to place my finger on a specific dream job, but one of my biggest aspirations is to somehow make it to the Met Gala. Whether that be as an Anna Wintour-approved invitee (unlikely) or as a reporter (more likely) is yet to be seen.

It’s fashion’s–and, in many ways, pop culture’s–most important night. As I mentioned before, the guest list is exclusively curated by the “Vogue” EIC herself and regardless of invitation, tickets are $15,000 (it’s a fundraiser, after all). By the transitive property, it’s not only fashion and pop culture’s most important night, it’s their most exclusive night.

It’s a cultural event. It’s broadcasted and photographed and whispered about days before and days after. I’m currently zooming in on the details of rapper 21 Savage’s gold, baroque style tuxedo jacket. Oh, and Celine Dion might be 51, but her legs looked better in her silver, fringed ensemble (complete with a feather headpiece) than mine ever will.

Gold was a favorite of the night, as it played the show stopping element in Porter’s appearance, Savage’s jacket and Awkwafina’s Altuzarra dress, as well as both the gowns of Mindy Kaling and Emily Blunt, among others. “13th” and “A Wrinkle in Time” director Ava DuVernay stunned in a green, singular rose-printed gown, while critically-acclaimed producer Ryan Murphy stepped up to the “Camp” theme in an crystal and pearl embellished rose gold suit and cape. Will men in capes be the next fashion trend?

Rapper French Montana embraced his Moroccan roots in a custom made thobe, which are often worn by men in the Middle East and North Africa. Frank Ocean, ever-true to his nature, opted for simplicity in a nylon Prada anorak.

“Momager” Kris Jenner drew attention from not only her frilly, boxy-shouldered coat, but from debuting a new platinum bob. Her youngest daughters, Kendall and Kylie, made sure to be seen in bright purples and oranges (not really on theme, but a statement nonetheless). Kanye West and Kim Kardashian West looked like they were dressed up for any other evening, as Kim was predictably dressed in neutrals.

Jared Leto’s date? His Gucci severed head accessory. Saoirse Ronan and Florence Welch were outfitted by the Italian fashion house as well, but chose the more traditional route of gowns instead (red sequined and powder blue embellished, respectively). Designer Tommy Hilfiger and his wife, Dee, won the award for the most patriotic attire of the evening. Recently reborn singer FKA twigs channeled her inner rainbow bird of flight.

Dear Rami Malek and Taron Egerton, please do better. You both play two of the most iconic “camp” personalities (Freddie Mercury and Sir Elton John, respectively) on the silver screen and you have done them an injustice with your lack of creativity.

The “American Crime Story: The Assassination of Gianni Versace” antagonist Darren Criss was Styles’ partner in pussy-bowness; he walked the red carpet sporting intense eyeshadow and a patterned jacket. Country songstress Kacey Musgraves, who hinted at her attire via her Instagram stories, arrived at the Museum in a hot pink, Barbie convertible, with a Moschino Barbie ensemble and blond wig to match.

Actor Ezra Miller, infamous for his red carpet entrances and looks, embraced camp in what I can only call a “René Magritte x the Addams Family” look. The same can be said for Alexa Chung, whose stitched floral mini dress and beret combined camp, cute and classy. Ocean was not the only invitee who chose simple over statement; singer Shawn Mendes opted for a black Yves St. Laurent tuxedo, “Creed” star Michael B. Jordan wore an embellished all-black suit as well.

Janelle Monáe, ever pushing the limits of fashion, wore a hot pink, black and white dress that featured an eye over the left breast. She accessorized with four hats stacked on top of her head impeccably and a clutch that matched the eye embellishment. Rapper Cardi B, whose 2018 Met Gala look was so incredibly on theme, arrived on the red carpet in a stunning deep red gown with a train as long as the steps themselves and as thick as a duvet. Queen.

As with all Met Gala’s, some who walked the red carpet did justice to the theme and some dressed as they so desired. This year’s “Camp” theme was undeniably up for interpretation and nearly every look reflected that. From Ocean’s simplistic, all black affair, to Celine Dion’s ethereal bodysuit, tastes of all kinds were reflected this evening in New York City. And what an evening it was.