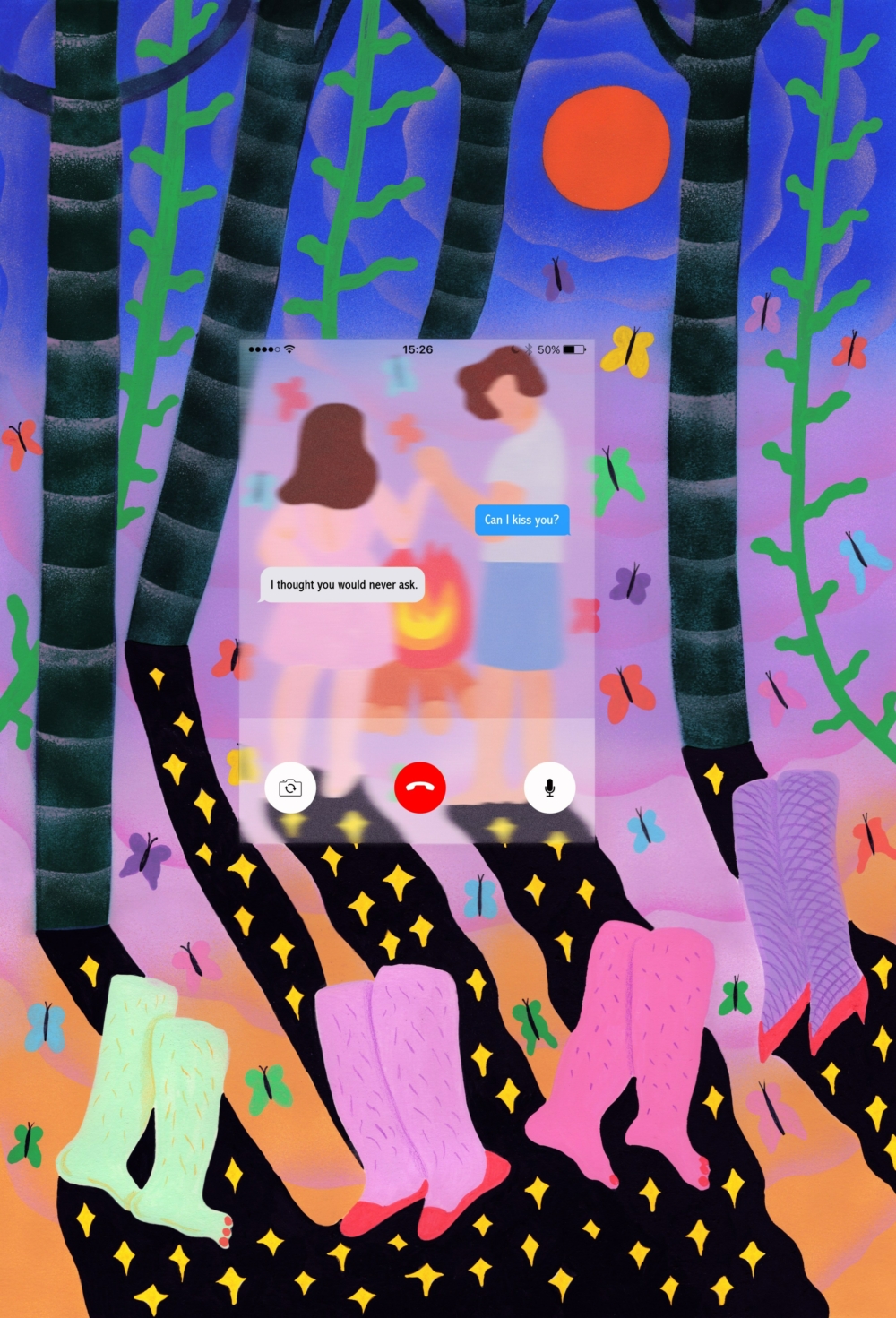 Illustration by Li Ya Wen
Story by Zoe Allen

We met and fell in love far away from technology.

It was a summer romance, born and nurtured in the heat of July in Texas, at a sleepaway camp so Texan that its lack of air conditioning is only compensated for by its larger than life personality. The camp operates on a strict no technology policy, providing a three-week haven for those who crave face to face interaction, life lessons and the lakeside.

I have called this camp home for years; it has seen me through my bangs, Invisalign, and countless other maladies and faux pas. I have always adored my cabinmates, the women who have transformed into my life-long friends, but I had one dream throughout my adolescent years at camp: I wanted a boy to ask me to the Wednesday night dance.

And he did, when I was sixteen; on a sailboat, he asked if he could flirt with me. I responded “yes” as we derigged the boat and walked to the music room, telling him about my writing as we laid on the wooden floor. He talked about the stars, how our existence related to an enigmatical celestial design. He spoke of concepts that previously would not have interested me, but the words were coming from his lips–the language of physics was suddenly all that I wanted to hear.

A day later, I sat there on the same floor for what felt like hours before he finally asked if he could kiss me.

“I thought you would never ask.”

If there was a competition for the most ideal place to fall in love, summer camps would take the top spot; we grew enamored with each other without the façade of social media and sans social pressure. I wore no makeup the first time we kissed, and did not for the rest of our time together—my physical flaws were transparent as he fell in love with me.

But summer camp is not forever–throughout our three weeks, campers and counselors constantly reminded each other that “the days were long and the weeks were short.” Time seemed to torture us then, taunting us with its brevity. (In the months to follow, I would quickly learn that time moves faster in the presence of someone you love.)

The world outside of camp, outside of us, loomed omnipresent. We deliberated about what to tell our friends and family back in the real world, what label we were now forced to define our “us” with. Was a week and a half to be the lifespan of our relationship? Or would we sustain what we knew to be true, even if it was unspoken–that we were in love?

Our zealous decision to try long-distance was our first “I love you.” We faked apprehension about entering this kind of relationship, but we knew that in reality, neither of us was ready to give up what we had. So, clutching our phones for the first time as boyfriend and girlfriend, we went our separate ways, together; he and his family had just settled in Austin, I went back to my lifelong home of Dallas.

We FaceTimed that night for five hours, attempting to find ourselves in the newly-acquired space between us. It felt so foreign–the screens, the air conditioning, the lack of each other. We reconciled our physical distance with our words, our voices carried by sound waves through phone screens. We spent lengths of time disconnecting and reconnecting our respective WiFis, hoping that our faces would appear as more than pixelated images, partially convinced that we would open our eyes and be pressed against one another. Those pixelated images became the norm; our screens have sponsored our relationship for almost three years now.

I often joke with him that we are a living, breathing advertisement for FaceTime. Our nightly conversations have morphed into rituals, becoming one of the only constants in my life. I’ll take off my makeup, climb into pajamas, brush my teeth, and shoot him a text: “I’m ready to talk whenever you are.”

I’ve found comfort in the familiar buzzing ringtone of his calls, home in our tradition of lightly pressing our lips to the camera before hanging up. We attempt to normalize our relationship through our video chats, searching for what other couples have in person across hundreds of miles. In many ways, we find it.

I call him on the subway, when I’m walking to the library, when I’m putting on a facemask. I try to call at the times that if we lived in the same location, we would be together. In that ideal, fictional world, we would take the subway together, remind each other not to procrastinate (but procrastinate by being with each other) and tease each other about how we looked in our “mud from the Dead Sea” facemasks.

We FaceTime at night out of convenience; we wind down together, preparing to embark on the search for sleep. However, a part of me believes that it’s beyond the simplicity of ease–we FaceTime nightly because if we weren’t separated by distance, our nights would be spent in the same bed.

We might have found love far away from technology, but technology is the way we sustain it.

There hasn’t been a day since we started dating that we haven’t texted (except when we’re physically together). I am regularly frustrated by the fact that my boyfriend lives in my phone, and I just as regularly have to remind myself to be thankful that he does. It is both a blessing and a curse; my “screen time” statistics are appalling, but it’s only because I’m in love.

Without his perpetual residency inside of my phone–all five feet 11 inches of him crammed within a five-inch screen–our communication, our love, would not be as feasible. Technology provides those of us who are in long-distance relationships with some of the same fulfillment as those who live in the same place as their partner. Similar to the locational differences between those who are in long-distance relationships and those who are not, the discrepancies of the gratification lie in the capacities of our physicality.

In relationships that are defined by separation, the gratification comes from texts, calls, and notifications. These little indulgences do not compare to a physical togetherness (face time, not FaceTime), but they are enough to sustain. They are enough to remind me daily why it is worth loving someone who is physically so distant because emotionally, he is so immediate.

Via phone, he is immediate enough for me to love, and to never lose sight of the fact that I love him. Our nights spent on FaceTime are our version of climbing into bed with each other. He’s underneath the sheets, reading Foundation by Isaac Asimov. I tug on the other end of the comforter, setting down my reading glasses and my book, before curling up next to him. “So, how was your day baby?”

He’ll respond with a few anecdotes and I’ll follow suit, catching up on what we missed since the last time we spoke. When I’m down, I’m less responsive, limiting my replies to a few words. He is rarely distressed in the ways that I know that I can sometimes be, but maybe I only think that because I’m in love with him. He says he’ll never let me fall asleep when I’m upset. So far, he hasn’t.

His digital presence soothes me in a manner that others did not, even when I could reach out and touch them; his slightly distorted voice and granular facial structure have the ability to appease my worst of uncertainties. Over FaceTime, we have found the ability to be there, but not there.

When the space between us dissolves, we live in a world free of texts, apps, and video chats. We revert back to our 100-degree summer romance, our falling in love three summers ago; we exist only for each other. FaceTime becomes but a faraway accessory, texting only reserved for letting my mom know that I arrived at his house.

I convince myself in those days leading up to seeing him that our 48 hours together will be infinite. We spend weeks waiting for singular days that are more fleeting than most; our time together ceaselessly proves that time moves faster in the presence of whom you love. I feel betrayed when our time together comes to an end, even though I should be used to it after three years. I doubt that I will ever become accustomed to leaving him.

Time seems to be our perpetual enemy; I spend days anticipating our time together, and they abandon me without failure. Time is the saboteur of long-distance romance.

I feel deceived by the first text I send in the wake of our long weekends, by the first FaceTime the night after I’m gone, frustrated by the truth that technology is our constant, not our time together. Even if I’m aware that I’ll be with him again in less than a month, the weight of leaving is crushing. It’s in those days that FaceTime and iMessage are not enough.

The reality is they are never enough, because as much as technology endeavors, my boyfriend inside of a screen will never compare to my boyfriend in my arms, phones on the bed side table, because being together is more than enough. It is everything.