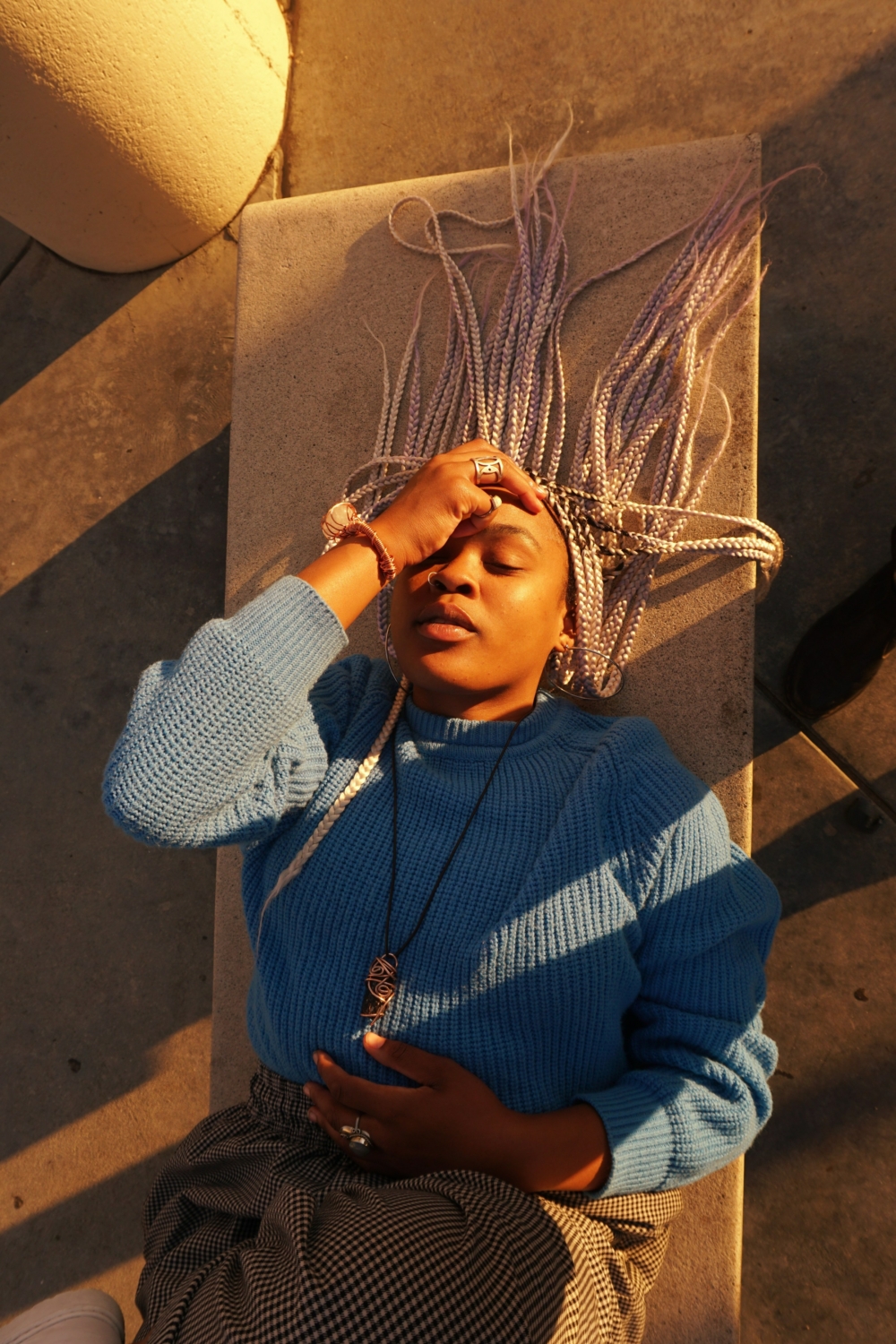 Story and Photos by Remi Riordan

I met Nyallah for the first time in December 2018 at a smoothie shop at the University of Southern California, where she is currently enrolled. We met to do the photoshoot that accompanies this article, and while we were there we chatted about her then unreleased debut EP and just hung out. It wasn’t until early January when we FaceTimed and I formally interviewed her for this article. By then, I’d listened to her EP, “Reflections.”

After listening, I could tell how personal the album was. The lyrics, the production; it was a labor of love and after our conversation, this was confirmed. Spending over a year on the project, Nyallah perfected each song, collaborated with friends, and created something incredibly special.

Last Friday, Nyallah held the “Reflections” release party in Navel LA’s Downtown LA space. It was an intimate gathering of friends and family; a perfect night topped off with her performance of the entire EP. The audience stood close, hanging onto every word, listening deeply, and basking in Nyallah’s energy. When we spoke at the smoothie shop and over FaceTime, she told me she was a performer; but witnessing her—so honest and in her element—only confirmed how beautiful it truly was to see her live.

What inspired this EP?

Okay. So I started working on this EP January 2017. I wrote the outro actually first, it was just like a stream of consciousness type of thing. I remember waking up New Year’s Day and was in this low place but I wasn’t depressed—just in this middle place [when] that song came to me. But “Reflections” all came together more so halfway through 2017 going into 2018, so the second half of 2017 and the first half of 2018 was when I was really writing it. It was during a time where I had just gotten out of a relationship that was really toxic and really incensed and I was having an identity crisis. Who the fuck am I? What’s real and what isn’t? What projections from other people have I taken and internalized as my own? [Finding out] what is actually me and learning how to discern the difference between the two. So part of that process was writing the music and just really coming back into myself. I do a lot of journaling, so a lot of these songs came from different journal entries and spoken word things that I would just kind of come up with. I started just writing more so for myself. “Reflections” is an audio representation of the growth and experiences that I’ve experienced in the last year or two that have really influenced the person that I am today. I’ve stated my peace and this is just a timestamp of where [I’m] at right now with [my] wellbeing, this is where [I’m] at.In terms of [my] identity with relationships and intimacy. And it’s just how I’m feeling about my blackness, spirituality, healing, growth, all of that. Enjoy this part of me, now to the next.

I was curious about the ordering of it because when I was listening to the outro specifically, it felt like a really interesting way to end it because, I don’t know, there’s something about it that feels like it’s a beginning of something and then you put it at the end. So what was your idea when you were ordering the songs?

Yeah, so it’s funny because for the longest time I wanted the outro to be an intro or something else, but when we were really working on it and putting together all of the drums and the vocals and everything, we were just like, “this just feels like a climax type of song, like okay, this is the end of an end, [but also] a beginning of something else.” And so it’s funny that you say that because usually people don’t say that. It’s really nice to hear that somebody else heard it in that way of “this is kind of a beginning.”

“Black Fantasy Dream” is the one that I wrote in April of last year. So that’s the newest one, but I feel like with the order of it—at first I am all about stories and like cycles and cohesiveness. At first I actually wanted the project to be a little shorter because I didn’t know if the story made sense because at first the story was “okay, here’s all this, like fuck shit, I’ve experienced—let’s talk about it.” But then [I changed the story to be] “here’s all this fuck shit that happened, but I’m also getting through it and I don’t want it to just be focused on the negative.” So the order of the project is really just taking you through how my mind was processing and how things are working, but kind of reverse.

In the intro specifically, as well as a couple other songs, you use natural sounds and tones. Is that to put yourself into the place of a story or is there another reason for it?

With this project, me and my producer Alec, we talked about the idea of having a live album because I’m really into live music, I watch a lot of live performances. I post a lot of [my live performances], because I just really love how vulnerable and honest and raw live performances. So with this project I told Alec, I want this to be alive project and I want to have real people on these instruments, but I also, you know, I’m a hip hop head so I respect that. And I love electronic music. So I wanted to find a balance within that. So the way that we found that balance was literally combining those sounds in those styles, on all of the songs, there are every sense, almost every drum part except for one song is a person.

Kind of going off what you were saying about live music, do you think [the EP] is meant to be seen live or do you think like someone just listening to it in their cars is adequate? What’s your ideal way for people to consider?

It’s funny because Alec and I were talking about this. We were talking about what it would be like to have a live performance of this. And I was like okay, so we have everything that we hear because there’s horns. Like there’s so many different things and the conclusion that I came to was that whatever, whatever, like medium that it is and that moment I feel like it’s going to work with this project. I’m very into like a pop music. I’m very focused on [how] the base needs to hit. When we were producing the project I was really intentional on when people are hearing this sonically and listening to it in their cars or on their phone, wherever. I wanted them to feel exactly what I’m hearing in my head.

Why do you think it’s important to work with other creatives when making your work?

There’s so much power that comes from bringing other people up with you and in a genuine way. And it was so simple. I want to normalize that a lot more in 2019 and beyond, support your fucking friends, work with your fucking friends, build shit from the ground up because at the end of the day, your community is what you’ve got.

You’re going to expand out to other communities, but your core community is what you have. And it makes me so happy seeing my loved ones flexing, my friends succeed and seeing them do well. So why wouldn’t I want them to be involved in my process so that we can all be successful together. Alec and I have talked about this a lot when we were writing. We kept saying like, “I want my acknowledgements lists to be extensive for every project that I do because I want to be able to be like, ‘yes, this is how many people assist.’” Like we’re all just trying to eat.