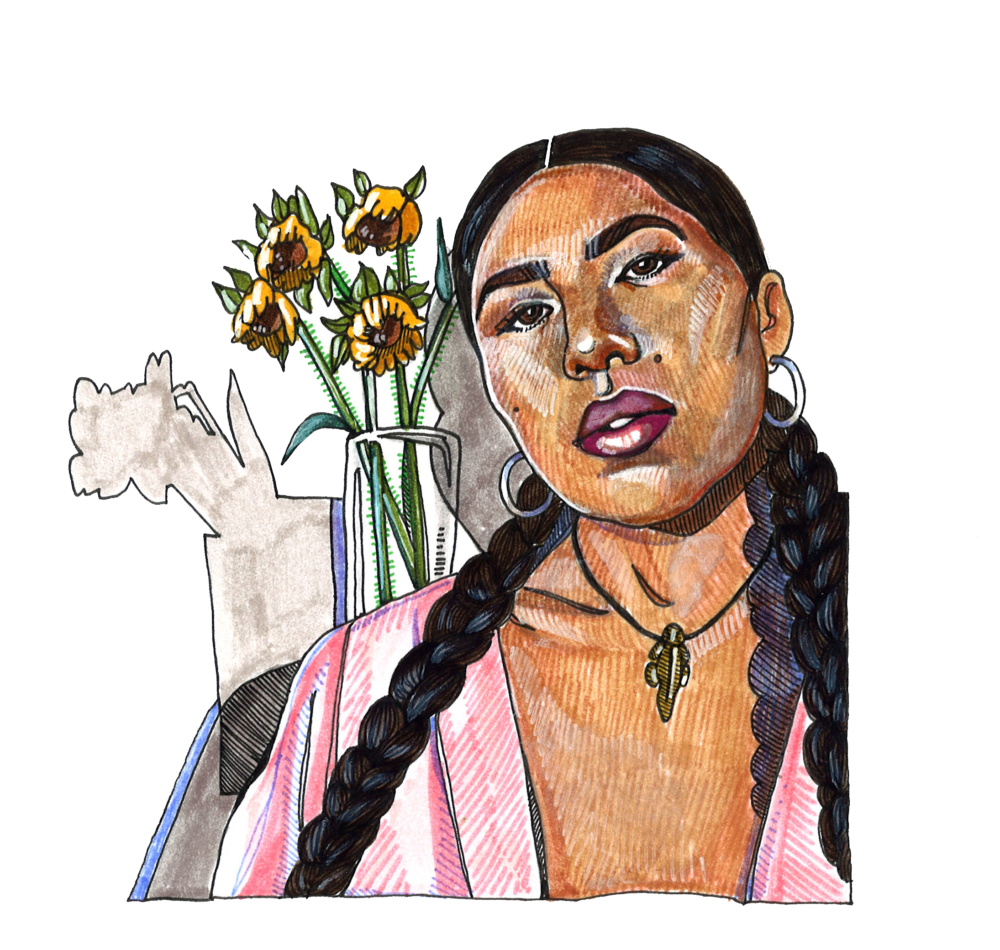 As part of her series on her favorite Indigenous artists and activists, Zoe Yu Gilligan was fortunate enough to share space with Denver-based Mexica artist and activist Josie Valadez Fraire in a downtown Manhattan cafe. They chatted about immigranthood versus indigeneity, fascism as an American export, healing trauma, gentrification since 1492, and the seemingly inextricable natures of modern sexuality and Instagram, and how they both intersect in her own life. Zoe is happy to report that the ancestors were definitely present in this exchange.

To get right down to it, being Central American almost always means that you’re labeled as immigrant and never as Indigenous.

Exactly. Even back home there is a very clear distinction between who’s just Mexican and who’s just Indigenous because of socioeconomic status. Indigenous peoples where I’m from, which is what we now call Zacatecas, are very much divided. Nobody wants to be Indigenous. When I go back to my village, nobody wants to claim that. Iʻm looked at funnily because they wonder why I say I’m Indigenous. To that, I say to look around and to look at ourselves. What are we? Indigenous. Even here in the United States, there’s this whole Native American narrative, and so because I’m not Lakota or Diné, all of a sudden I’m just Mexican. Our peoples are Indigenous too.

Indigeneity isn’t just about who your peoples are or your blood—right now, it’s about how you are navigating this life. Are you trying to be involved in your ways, learning, being a part of ceremony? Not everybody has access to these things. So I think a lot of it is about the intent and how you are carrying that spirit within you, because it is so easy to put it on and take it off. I never walk into any space where people think I’m white, but depending on the space itself, I can very well be seen as Latina and that’s all I get. Lately, though, people will ask me which tribe I’m from and that’s so interesting to me because before, I don’t think I got that same response. Clearly, people recognize that there’s some indigeneity there; however, I think a lot of people are uncertain. Uncertain, because a lot of people don’t even know what to classify as Indigenous. A lot of people homogenize indigeneity, when Indigenous people across oceans and lands are Indigenous in different ways, depending on social and cultural contexts. They think indigeneity means one thing and one type of ceremony, or regalia that looks a certain way. There’s very much a North American ideal about what indigeneity looks like and what it should look like. It’s an interesting thing to navigate.

It reminds me of this “post-colonial” mentality many people are duped into upholding. “Post-colonial,” as if colonization is an artifact from the past instead of a living, breathing, tangible being so many of us encounter every day.

Depending on the context, the colonizer can look different, but impacts and themes of colonization are similar nonetheless, across times and lands. On this continent, we’ve set a standard as to what imperialism and fascism look like, and how they’re deeply rooted in colonization. It’s trans-global at this point. It’s everywhere and people are starting to replicate it. Even folks in our community! We’ve set this standard for here and abroad. In the United States, we get so stuck on ourselves. Other people are much more globally informed, but here, our vision stays just on us. There’s no consciousness of what’s going on around us. This is especially interesting when conversations don’t breach anywhere farther than the shallow end. It starts with white settlers and colonizers, what indigeneity looks like, or the whole issue of immigration. I’ve met Natives who are anti-immigrant. The concept of immigration is colonial in itself because so many of our peoples—mine definitely, at least—are migratory peoples. We traveled lands because there weren’t borders. When we imposed those borders, these labels popped up and so did literal social contexts of boxing people [into] specific lands. And then owning land as the overarching theme of everything too, which has never been our way. We belong to the land. The more that we buy into this capitalistic system, the more we normalize the thought of, “I can purchase this plot of Earth and it is all mine, and ours, and they don’t get to be here.” And this is exactly what’s happening. Immigration as a whole, its whole context and legality, is totally constructed. So how do we fight against this as Indigenous peoples in this country? We have begun to adhere to borders because we were forced to adhere to the idea of them.

My parents didn’t come to the United States “just because.” In our village in Mexico, there was no way for us to survive, to have jobs and get enough money to feed our family and provide. They came here out of a necessity to survive. As Indigenous peoples, this border that we’re crossing in order to access a whole other [sociopolitical] structure has had an impact back home. Immigration has been killing our people for generations, and now it’s totally shifting the dynamics of our people here and back home. People are leaving their lands, from Nicaragua to Peru, because of the fascism this system is exporting.

So who gets to be defined as human and who doesn’t?

Most of us don’t make the cut. (Laughs.) We’re “aliens.” As I further my understanding of all the systemic parts of this empire, I realize that we must reject it all, every single part of it. Even for those of us who have struggled and faced oppression, we are afforded many privileges that many people worldwide just aren’t. We become so comfortable in this system that we don’t actually think about how every comfort we have is leading directly to the oppression of many here and elsewhere. How do we resist the system by literally not contributing to it whatsoever? We talk about it all the time, you know—“dismantle the system,” et cetera—but what does that look like tangibly?

When we talk about the larger issue of colonization, a lot of people associate it with this 1492 narrative, hundreds of years in the making on this continent. Colonization, though, is alive and well right now. We’re not just dealing with the aftermath of it—we’re right in the middle of it. A lot of people will use the term “neo-colonialism” for what’s currently happening, but it’s not new. It might look different, but it’s definitely not new. It’s just a modern manifestation adapted to this time. The structure still looks the same and the power dynamics still look the same. Gentrification, for example, is exactly what happened to my peoples over four hundred years ago. Kicking out people, forcefully and violently displacing communities, is not something we’re past. Colonization is not something we’re past. What I think is so insidious about this is that it’s slow; its effects will really be seen in the next generation. It’s an ongoing genocide that is part of a greater colonial plan. When we talk about genocide, yes the actual killings of our people must continued to be talked about, but we must also talk about the killing of our spirit. Cultural genocide kills off a people, as well as genocide of the lands and waterways and mountains.

Auntie Winona LaDuke said, “Violence against the land has always been violence against women.” This painful truth particularly attests to the predicament of Indigenous women. 1 in 3 Indigenous women is a victim of sexual violence. We’re just a statistic. How then do we express our sexualities while also protecting our bodies?

Honestly, this discussion of sexuality is something I’ve been struggling with for a long time. One, the healing of trauma. And two, to actually celebrate and feel really good about expressing my sexuality is really hard. As women, we’re always pitted against one another. Instagram, for example, is [liberating], but it also isn’t. I actually find it to be really toxic in a lot of ways—especially when it comes women and our bodies. I mean, it is a visual platform first and foremost.

It really exists solely to serve the gaze. It’s a scoptophilic phenomenon.

Absolutely. It heavily feeds into the patriarchal gaze of our society and even our world, honestly. Beyond this, though, it really just pits women against one another. Worrying about likes, followers, and what others are posting. It’s really hard to heal from all of that, from Instagram. A lot of us preach body positivity—and I say “us” because I definitely feel like I’m part of it—when in fact we end up perpetuating a lot of misogyny we’ve internalized. For instance, comparing ourselves to other women. Even if we don’t say it aloud, so long as it’s in our minds or our spirits, it’s still there and it’s doing a lot of damage. I can sit here and feel great about myself, but then I can go on Instagram and my vision of myself can shift to, “Okay, I’m great, but I am lacking this and I’m not good at that.”

Sexuality isn’t always about physical appearances, but we’re not often able to express it in other ways. Only certain people are allowed to be “sexy.” Certain people are even exclusively given the label “sexy,” while others are never considered sexy at all. For many of us, expressing our sexualities and how they’re received can definitely be tied to forms of trauma. It’s not something I always talk about, because sexuality is personal and private and sacred. It doesn’t always need to be shared with everyone.

So how do we shift expressions of sexuality from physical (but digital) manifestations like nude pictures to something more beyond the corporeal?

It absolutely has to be beyond physicality. Sexuality is just something so much deeper than that anyway. It has to do with me first. My sharing it with somebody looks different, but I need to be comfortable and allowed space to heal from my trauma that might normally prevent me from being interested in someone. That has been a journey of mine for many years and it is still difficult at times. It is a very complicated thing. Indigenous women are usually sexually assaulted before the age of eighteen, but it’s tragically bound to happen at some point in an Indigenous woman’s lifetime. The chances are incredibly high.

One thing I really struggle with is how every day my existence is hyper-sexualized. I get harassed on the daily. I hate walking down streets, I hate it, and I try to avoid it at all costs. Even at the grocery store! I get harassed everywhere. In one realm of my life I’m very fetishized, but in another, within myself, I also feel not sexy at all as a result of internalized racist-misogyny. So how do I balance that, then? On one hand, there is so much harassment, but on the other hand, I’m not even seen as desirable. Obviously there are many other layers that go deep to this, but it’s just such a larger issue about the violence non-white women face.

I just know that I feel sexiest when I feel positive about myself. Again, it’s about me and not about others. A lot of it has come from self-acceptance of my body and my features. When I look at my face, I see ancestors there and that makes me so happy. I love knowing that they’re here on this journey with me, guiding me along the way.