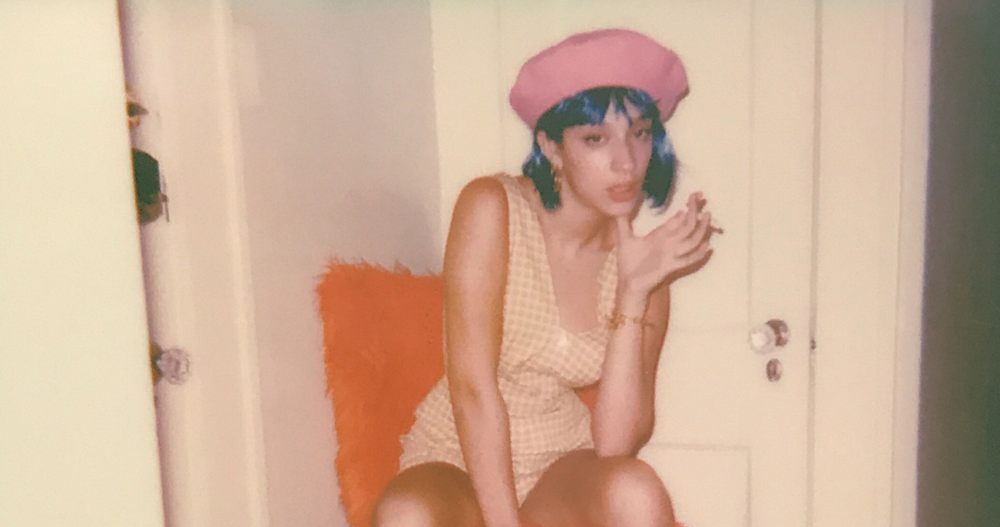 I sat down with Sara over iced coffee (keyword, iced). Her signature style is almost as dreamy as her music—she answered my questions with a never failing smile, oversized black t shirt tucked into gold snakeskin paperboy pants, statement gold necklaces, her hair pulled into a flawless bun styled with a tasteful amount of brown hair clips. My favorite accessory of hers were her gold cherub charm bracelet and her playboy bunny pink tote, both of which she thrifted, true to her style.

“I’m not only glitter pop, I’m also glitter R&B,” she said, making an addendum to her previous statement. She wants the world to know that she can do it all.

Sara’s popular YouTube channel consists of mainly covers of other artists songs, and her signature lullaby-like, dreamy voice has garnered her over 140,000 subscribers. This past summer, Sara decided it was time to introduce not just her melodic voice, but her creative voice to the world, in the form of “Heat,” a five song, glitter pop/R&B triumph.

“Heat” is a quintessential summertime record—the title undoubtedly a partial homage to the blistering Texas summers—and despite its brevity, Sara’s songs linger with the listener, making them feel like, well, glitter.

Tell me about your style—both musically and fashion wise. Whenever I see any of your Instagram posts, they are very “Sara King”…looks I could only see you pull off.

I would describe my music as “glitter pop”, because that’s what I’ve been calling it recently. There’s a lot of subgenres these days, there’s almost everything. My [music] kind of fits more in the category of glittery and fun pop music. It’s not literally pop music because it has some R&B feel to it and some other bits and pieces. I’m inspired by people I listen to, and then really girly stuff, like bright colors—my favorite colors are pink and purple, so that’s where my fashion comes in. My fashion is kind of inspired right now by 90s supermodels, 2000s Rihanna looks, you know, or Britney Spears, Spice Girls type looks. I love vintage pieces because no one else can have them, and it’s just yours.

You recently released your first EP, a little project called “Heat.” What was it like to put out your first record of original music? What has this summer been like supporting “Heat”?

It was exciting, because I’ve been doing covers for such a long time. Leading up to it, I was really done with covers, and I really wanted to put original music out. Basically, my process was that I would either come up with something on my guitar and try to write something to it, or I would find YouTube beats, like type beats or whatever, download them, put them into GarageBand, write over them, send them to my friend Herrick & Hooley (Ian and Hunter), and then rework them and make them my own. I’ve been getting a lot of good feedback, and although I had a lot of support already, this time, [the music] is my own.

You said in the previous question that you were moving away from covers, but I have to ask: what has been your favorite song to cover thus far? Why?

I think that “Sunflower” by Rex Orange County was a really fun one to cover, but it was also really frustrating. I could not get through that song, it was so hard. I had to start over at least 30 times that night, because I just kept messing up. But I loved the feedback I got on that one. It was just a fun one to sing. I love to do a lot of smooth R&B covers, because I feel like that’s what suits my voice. I feel like my low range is my favorite one to sing in. I did a Willow and SZA cover of “9,” and that one was pretty good too.

What do you want people to know about “Heat,” your next body of work and yourself?

“Heat” is just an introduction to what my original music is going to sound like. I feel like it’s cohesive, but I also feel like each track is so different. The intro [to “Heat”] is more fun, jumpy I guess. “Dreamz” is what I really like to sound like. 88 Days…I don’t know they’re just all really different. “Honeymoon” is sort of an R&B, in my feelings type song, that I want to incorporate more into my next album, because I’m not only glitter pop, I feel like I’m also glitter R&B. I feel like I’m comfortable singing stuff like that as well, and I want to incorporate that more. [“Heat”] is kind of just an intro, and the full body album is going to be more personal, probably, and have a more R&B feel to it.

Also, I’m like just waking up by the way.

What inspires your music/performances? How has Dallas, Texas, influenced you as a musician?

The thing that inspires me here are my friends and family, because they come to every show and help me feel comfortable when I’m up on stage. I don’t know what I’m inspired by in Dallas, because I’m not really inspired by places. For performances, I kind of get on stage and pretend I’m in my bedroom and singing alone. I’m really inspired by fierce ass women, I’ll watch SZA or Kali [Uchis] on stage and see them working it on stage, and be like “damn”, I want to look like that. I don’t want to say fierce, but I don’t know what else to say…maybe “grooving”. Trying to be confident.

Speaking of Kali and SZA, who would be your dream collab and why?

I definitely want to collab with a bunch of female artists that I’ve been looking up to recently. Lorde is like my favorite artist, ever. Lorde, Kali, SZA, Lana, Charli XCX. My friend Sophie Meiers. It would be really cute to collab with A$AP Rocky, you know like how Lana does. To be on that level.

What are your plans for the next year? Where do you see yourself headed musically?

I’m going to put a lot of focus into my full length album, make sure it sounds exactly the way I want it to, make sure it flows really good. Add different elements of my style in it. I’m also going to try to be doing a little Texas tour if possible, a lot of my listeners come from Texas, so I think that would be cool to do.